Three days, two people, and one car in Canada. A lot of firsts happened for me in this leg of the journey: first time crossing the border on land, driving in a different country (on the metric system), staying in an Airbnb, and seeing one of the seven wonders of the world.

The four-hour drive from Detroit to Toronto involved interesting signage, windmills, and coming to the realization of just how similar life in Canada is to the U.S. I tried to find every difference imaginable, and Danny and I came to the conclusion within this first four hours of time spent traveling across the border, was that Canadians knew how to have more fun, and could access this from right off the interstate. Sure, we Americans have some water parks or casinos every few exits, but during the drive at nearly every exit, we witnessed signage for just about every entertaining activity possible. For example, we could take Exit 23 and arrive at the Sky Zone Indoor Trampoline Park. Or, exit 47 and enjoy the Organized Crime Winery. And it’s not Disneyland, but Wonderland for Canadians.

After the mini road trip into a different country, we arrive at our Airbnb in Toronto. Downtown in the center of everything, I was highly impressed with the very first AirBnb I selected to stay at. Our view is shown in the photo below: 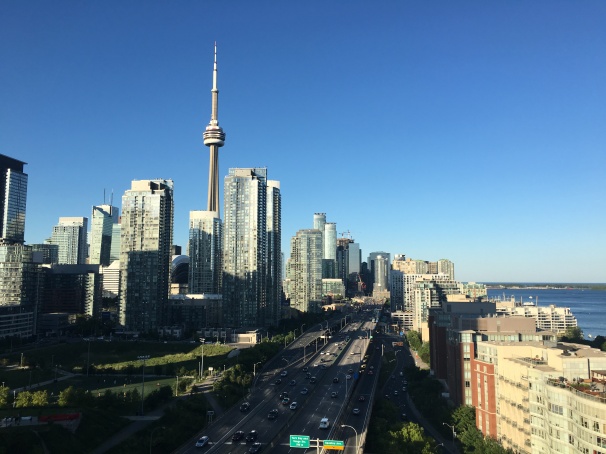 Only having one full day in the city, we decided to start the day off with riding our bikes to a yoga class at Power Yoga Canada. The city had very nice bike lanes, and it seemed like a straight shot to the yoga studio about 7 miles away; however, half way through the journey our scenic trail along a small river suddenly ended. Before reaching this halt, I had the thought running in my head “they really have bike lanes right in this city, this is so peaceful and stress-free getting somewhere 7 miles away” …and then this happens.

We turn around to some stairs to take us across the street and into a park. The park happened to be at the bottom of an extremely steep slope. We had no way out, other than to carry our bikes up multiple stair cases until we reached the top. I called it, “urban”cyclocross. Completely out of breath and discouraged if we were even going to make it to the class on time at this rate, we use our problem solving skills and find a route that is accessible. Through trial and error of turning around on streets, stopping to check the map on the side of the road, and pedaling fast to make up time, we somehow made it to the yoga class with minutes to spare. We were already sweating, out of breath and thirsty beyond belief before even stepping into the hot yoga studio.

Somehow making it through all of the chaturangas, and actually feeling revitalized spiritually while being dehydrated physically, we asked the teacher afterwards where a good place to get a juice at near by would be. She suggested getting a local cold-pressed juice at a grocery store called Buda Juice. It was just what the doctor ordered after what we just put our bodies through, and the juice revitalized us enough to get back on our bikes for the 7-mile journey through the bustling city. 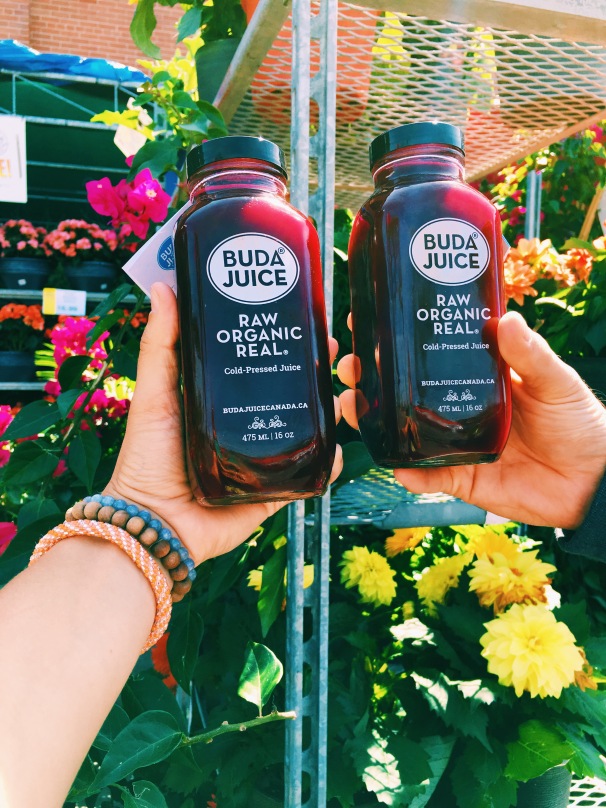 The remainder of the day we treated ourselves to rest and relaxation after what we endured in the morning. We got on a boat in Lake Ontario to see the skyline from the water, walked through downtown to find a local fish and chips restaurant, took advantage of the hot tub at our AirBnb, and sat on our balcony with a glass of wine and enjoyed the view. Danny and I knew there were countless more activities we could have done and experienced, but there was something nice about not “having to do everything,” which was the mentality I had as we began this journey. We people watched, walked around, and took in the beauty of Toronto.

The next morning we checked out and headed for New York City! (spoiler alert) But before that I had to see one more thing during my short visit to Canada. I had to see Niagara Falls…on the Canada side. Everyone I know who’s seen the falls has said to go to the Canada side versus the American side. I didn’t really understand why they were so persistent with us seeing that side of it, I mean, it’s just a waterfall right? It wasn’t because there were less tourists, because believe me, it was a swarm of obnoxious tourist attractions throughout the entire park no matter what country you’re in.

It was because on the Canada side, you actually face the waterfalls and see them right in front of you. On the American side it looked like you had to walk out onto the man-made built ledge to get a glimpse of the side of the falls, or get a ticket onto a boat to get right up next to them. From the Canada side, you could walk into the park for free and enjoy to glorious scene of the falls, and even get a little mist on you from the power and magnitude of the rushing water.

To get away from the endless cluster of tourists, I caught glimpse of two trees next to each other. To everyone else it’s two trees right next to each other, but to me… it’s the perfect hammock spot. So I pull out my Kammok Roo, my most loyal companion, and set it up away from the crowd in a serene, grassy plot with a picturesque view of the falls (as shown in the feature photo.)

It was the best way to end my two days in Canada. Even though I was in a completely different country, I still felt at home with yoga, my bike and hammock (and Danny, too!)

Next stop, my dream city….