This is it! A year and a half of saving, planning and preparation, and immersing myself in a community that supports me in living my biggest life possible has brought me to this spot right here, right now.

The skyline of Chicago, Illinois, takes the backdrop of my hammock’s eye view. The picturesque blue water of Lake Michigan compliments the bold Gold Coast yellow of my new Roo hammock. Thanks to my friends at Kammok, they set me up for adventuring success with some new gear to accompany me on my adventures!

My goodbyes to Houston were extended to Austin, Texas, where we payed waterside in Gus Fruh, a serene watering hole along the Greenbelt. We took advantage of the perfect nestle of trees above the water to hang our hammocks on. We created a Kammok MOB with a color scheme of Roos present, and a masterful selfie was produced, along with some epic Polaroid camera shots. 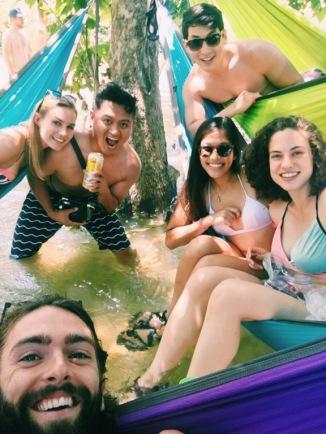 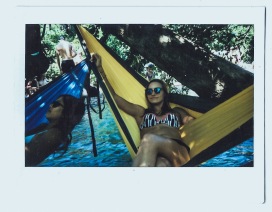 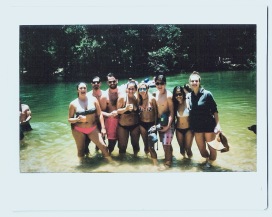 The gang in Gus Fruh

Next stop– Longview, Texas, where I saw my parents, brother and sister-in-law before embarking on the road trip of a lifetime. Danny, my boyfriend from Detroit, found his way into the ‘Pine Curtain’ of Northeast Texas, and we all came together to celebrate the exciting opportunities and achievements my family is blessed with. On June 2nd, we gathered around Cajun food from Dudley’s and said cheers to my parent’s 32nd wedding anniversary, Jeff and Trang’s move to Houston and the start of their nursing careers, and to the beginning of my and Danny’s road trip, which we are calling #TheWholesomeTrail.

The family in Longview, Texas

The visit was short but sweet, and the next morning Danny and I headed North in the vessel we are trusting to take us thousands of miles through this beautiful country, a ’05 Honda Civic. With bikes hanging onto the trunk of the car, we headed North through the desolate backroads of Arkansas to Little Rock for a lunch pit stop. By dinnertime we arrived in St. Louis, Missouri. In each city we stretched our legs and took in the scenery on our bikes, taking advantage of something that was foreign to us in Houston…street bike paths.

Promptly at 2am, we arrive in Chicago. We were greeted by Danny’s long-time friend, Adam, and he gleefully introduced us to his high-rise apartment in Printer’s Row. Our heads hit the pillows within the darkness of the city, and we were out in seconds. Awakening quickly with the adrenaline provided by a new city, we hopped onto our bikes for a 7-mile ride to a yoga class at Om on the Range yoga studio. I instantly felt at home, being it a Baptiste-affiliated studio, just like my home studio in Houston, and comforted from the seat of my own fixed gear bike.

The second half of the day consisted of Adam, a hospitable host, showing us ‘his’ city. We walked through the historic fine arts building off Michigan Avenue, and received exclusive access into The Art Institute of Chicago with Adam’s membership. We took on our role as tourists as we strolled through Millennium Park to view our reflections in The Bean and witness other stimulating attractions nearby. 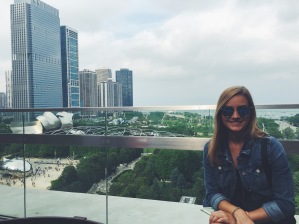 Our reflections in The Bean

The eventful two days caught up with Danny and I, and we felt the readings of exhaustion on day two in the city. The main objective of the day was tho be outside and enjoy the outstanding summertime weather Chicago is known for. We spent the majority of our day lake-side at North Avenue Beach, where the feature photo of this post takes place. I was impressed with the beauty of the beach, although the water was much too frigid for this Southern girl. The 58-degree water was no match for Michigan-natives, Adam and Danny, as they jumped in multiple times! Their childlike joy was the highlight of my day. They warmed back up by playing soccer as I observed from my hammock.

The high of energy provided by the beautiful afternoon slowly wore off as the evening approached. We saw a improv comedy show by the infamous Second City, a comedy group I know as the step before making it onto SNL. It was incredible to witness, these talented young comedians utilizing their knack for on the spot joke-telling for the world to see. After the show, we made our way to Wicker Park, a hip neighborhood outside of downtown. We found a ramen restaurant called Furious Spoon, and the moment our bellies were full we soon realized how tired we truly were, and called it a night.

Already on day three since arriving in a new city, and I’ve learned a lot about myself and lessons I can take with me. I’ve learned how easy it is to slip into the feeling that you have to fit everything in you want to do, or you won’t be happy. The lesson I learned is that it’s really the opposite. If I make the conscious choice of not having any expectations, and instead, focusing on the people who surround me to create the world and the experience of the city, then I will find the happiness within me instead of expecting it from outside circumstances. Masterful road tripping is really finding the balance between going with the flow and logistics, while still setting the main intention of fun. Still a work in progress, good thing we have many more stops on this journey.