The setting for this post I was hoping for a beautiful sunrise over the beach. Instead, I got something just as entertaining. Soon before dawn, my brother and I decided to go venture the beach area of Đà Nẵng before we continued our tour of central Vietnam. I found a spot between two palm trees to hang with nothing but sand in waves in view. As the sky started to lighten behind the billows of clouds, more and more locals began appearing on the waterfront doing their exercises. Prime people watching, I must say. They would run in and out of the waves, do aerobic-style stretches, pull up on gymnastic poles, and other unique activities. Many Vietnamese civilians do their work out early in the morning before it gets too hot. I didn’t realize it, but I set my Kammok hammock up right in front of a sand volleyball court, as you can see in the featured image. Locals began to play their version of the game, only using their legs and head. Jeff and I hung around and watched a couple of games, instead of viewing a sunrise like we originally anticipated. The most amusing part of the game was when a team lost, they were forced to crawl on the sand like little children and the winning team would jokingly kick them! Unfortunately I was too entertained to pull out my camera for this.

We watched a couple of games (it’s not too often these guys had an audience, and of white people for that matter). Jeff worked as their ball boy whenever it strayed too far away. Later on we walked down the beach for a bit, taking in the beautiful scenery of mountains and the giant female Buddha statue in the distance. Soon we couldn’t handle the intense wind and chill in the air any longer, so we headed back to the hotel.

Rewinding a few days, I rang in the New Year with foreigners at a bar in the “America town” of Huế…with that being said, I was recovering from that evening as we made our way to Đà Nẵng the next morning. Good thing I sat in the front, because it was possibly the hilliest and windiest two-way road up and down and all around mountains I have ever been on. The “scenic route,” as they told me, was definitely worth it though. We made a few pit stops along the way for photo ops, and boy did I take advantage.

New Years Day was basically a shopping spree. We stopped at a massive marble “palace” (I like to call it) where they made just about anything out of marble. After lunch at a peaceful beachside restaurant, we dropped off our belongings at our hotel in Hội An. This town is quite small, but it’s a big tourist attraction because it is known for their gorgeous paper lanterns. As the sky grew dark all of us walked down the lantern-lined streets with souvenir shops to explore for days. 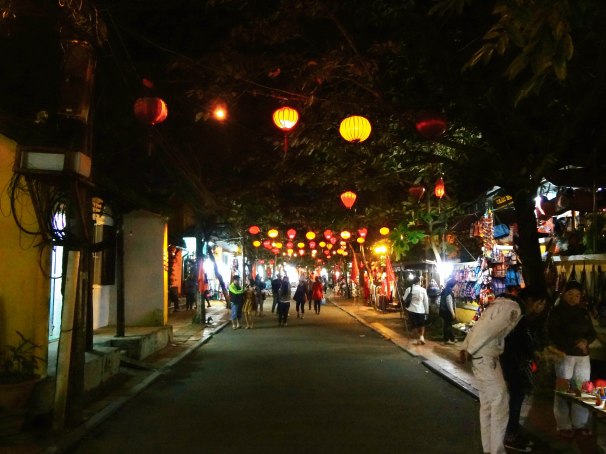 Our last full day in central Vietnam was spent on a mountain. We ventured to the top of the Bà Nà mountain via one of the longest cable cars in world. At 6 kilometers long, we made our way 1,500 meters up. It was such a tease, half way up in the cable car we were in a cloud…and never escaped. However, it was the winter season on top of a mountain, so what can you expect. Of course with us being a group from south Vietnam, we sure didn’t pack properly. In our light jackets, flip flops and the bitter cold weather of a mountain top, we hurried our way into the indoor section of the park. We spent the morning riding bumper cars and enjoying the 5D theaters and museums. In the afternoon, some of us dared to go outside to make our way to a historic French wine cellar. Soon enough we couldn’t take to cold much longer, and remembering our beach-side hotel, we made our way down the mountain and called it a day.

We ended our journey of central Vietnam at the tallest female Buddha statue in Vietnam. Standing 67 meters tall, she looked upon us and smiled as we took all of our touristy pictures with her. I even pulled off some yoga moves for her.