Found the most peaceful spot, on the most beautiful day, to set my Kammok hammock up in Vietnam. I’m hanging beside the Sông Hương, or “Perfume River,” watching the boats pass by and the mountains in the distance. The road is through the trees behind me and I can still hear the honking of the motorbikes, but my ears are pretty accustom to the street noises by now.

Jeff, Raul, Trang, her parents and myself, traveled up to the central part of Vietnam, and this is our third day here in this area. The day we arrived, we drove 4 hours, part of that drive on the Ho Chi Minh Trail which is now called Highway 2, to a town called Quang Binh. It is known for having some of the most beautiful caves in the world; two of which we were able to journey through. That afternoon we took a 30 minute boat ride on Son River to the water cave called Phong Nha- Ke Bang. I was in awe of it’s glorious wonder, and wore my GoPro headgear to capture every moment, although the video probably doesn’t do itself justice. Our tour guide, Son, pointed out many shapes in the stalagmites and stalactites, I felt as if we were children gazing up in the clouds. The next morning we climbed up part of a mountain to explore Paradise Cave. The cave is nearly 31 kilometers long, most of it hasn’t even been discovered yet. We walked through one kilometer of it.

The following day we made our way back down the bumpy highway roads of Vietnam to Huế, where we are staying for two nights. We had a very thorough lesson in the Vietnam history this morning as we toured the old capitol of Vietnam. There were once kings and queens of Vietnam, and the castle we toured was beyond astounding. Such detail they put in every part of the architecture; from the roof to the baseboards. There were mosaics of dragons and phoenix on the walls, the symbols for the king and queen. We also toured the Pagoda, basically looks similar to a Chinese version of the Leaning Tower of Pisa… except not leaning. This is where they would worship to Buddha on each floor of the tower. After that, we visited the MOST elaborate tomb I have ever witnessed, and probably ever will. Lăng Khải Định is the tomb of one of the kings, and after he died at the age of 40, they increased taxes on the people 30% to have enough money to build it, and took 11 years to do so. Seems ridiculous, but I certainly understood why once I saw it. 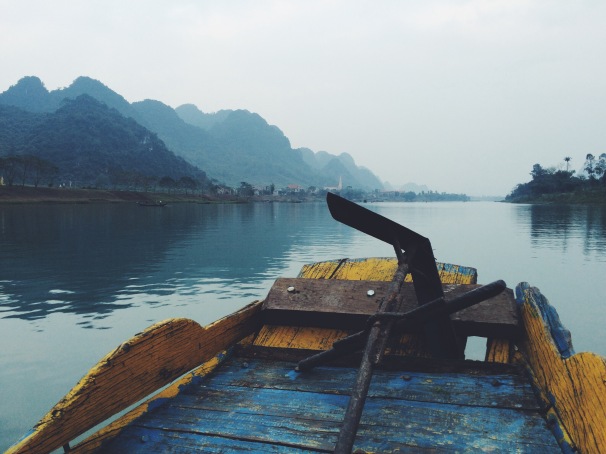 The coolest experience of this trip so far would have to be the traditional Vietnamese wedding of my brother and Trang. Two days before we traveled to central Vietnam, they had the ceremony in her hometown. The celebration was complete with confetti cannons, a dancing introduction to welcome us on stage, champagne fountain, unlimited food and beer, and so much more.

Talk about culture shock. 550 guests, everyone speaking Vietnamese, I had no idea what was going on really. I just heard my name and walked down the aisle in my beautiful Ao Dai, grinning from ear to ear because it was so surreal. Most of the adults spoke no English, but were kind enough to come and meet me. If they had children, they used them to talk to me, since they learn English in school.

After the ceremony, Raul and I sat at a table with Trang’s friends that speak English, while Jeff and Trang changed out of their traditional gowns and into the traditional American wedding attire. They then paraded around each table with the photographer and videographer, greeting each of the guests that came, taking pictures with them, and the men offering Jeff their beers. I didn’t realize how popular drinking is in the Vietnamese culture. Not so much for the women, but the men are usually pressured by their elders to drink, and can’t say no if they offer them a beer. Jeff and Trang changed their outfits a third time to say goodbye to guests as they were leaving. They literally posed for pictures the entire time, and didn’t eat until after the two hour event ended.

I really love being a part of this culture, it’s so welcoming and joyful. Happy New Year! 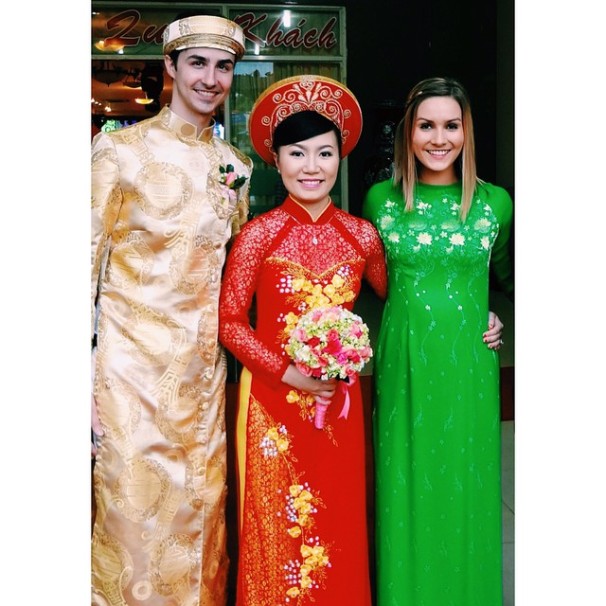